I have created a free Website and it would be great if you could come and have a look!Please Register. . .Have Fun .:-) !

Goldfish Big As a Dog Caught!

Goldfish Big As a Dog Caught! 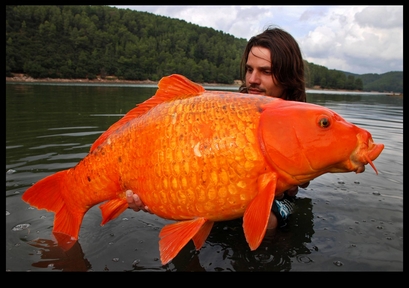 This just in from the "strange but probably true" files. Fisherman Raphael Biagini reeled in what is believed to be a 30-pound koi carp in France, where the fish are quite popular. The fish, a vivid orange, looks a great deal like a giant goldfish. The photo is several months old, but it's buzzing right now, thanks to an article from the U.K.'s Daily Mail.Not surprisingly, Yahoo! searches on "giant goldfish" are currently soaring. However, it's important to remember that this guy only looks like a super-size version of every child's first pet. And, for the record, Mr. Biagini, who has caught many a giant carp in his day, returned the orange fish to the water after having his photo taken.